The Project of Hacivat-Karagöz: As the London Yunus Emre Institute, we are proud to share our educational content project called ‘Hacivat-Karagöz’.

By launching this project, we aim to promote Turkish culture as well as establish a bridge between students coming from different cultural backgrounds. Our main aim is to provide a space where students are able to learn about the traditional Turkish show while being entertained at the same time. We strongly believe that the peaceful coexistence in our multicultural society relies on the understanding of other cultures and mutual respect.

About the Play: This traditional play was one of the most popular entertainment past-time in the Ottoman Empire and was played during the religious month of Ramadan, at festivals, coffeehouses and gardens. The main characters of the play are called Karagöz and Hacivat. Karagöz represents the  morals and common sense of society whereas Hacivat represents the educated, well-mannered, smooth-talking aristocracy. Each character tries to persuade and influence the other in their quest to solve every day problems. The other characters are Çelebi, the charmer; Tiryaki, the opium smoker; Beberuhi, the dwarf; Bekir, the drunk; Denyo, the half-wit; Civan, the tightwad; and Mercan, the spice trader. There’s also the Greek doctor, the Jewish scrap dealer, the Laz boatman, the Iranian poet, a handful of licentious women, and a host of other diverse and shady personalities. The play was prevalently played in Istanbul which later spread to other parts of Anatolia by the artists going on tours.

The technique of play: The white curtain on which Karagöz is played is named as “the mirror”. At first the curtains were 2×2.5 m. then they began to be made in 110×80 m. size.  In the inner side, below the curtain there is an “edging wood”. There are also cymbals, tambourines, canes, pipes and lamps to illuminate the curtain. These are on the edging wood. The designs used in the play are 32-40cm sized and they are generally made from the skin of camel or cows. The skins are made transparent with a special method. Then they are embroidered with sharp painted blades called “nevregan”. The pieces are tied with ropes named rafters or catgut. Then the designs are painted with Indian ink or root paints.

The show is free for schools for a short period of time. If you want to host the show fill in the form below.

Important note: The Yunus Emre Institute in London cannot be accounted for any incidents that occur during the show. The host institutions are responsible to take all necessary health&safety and security measures. 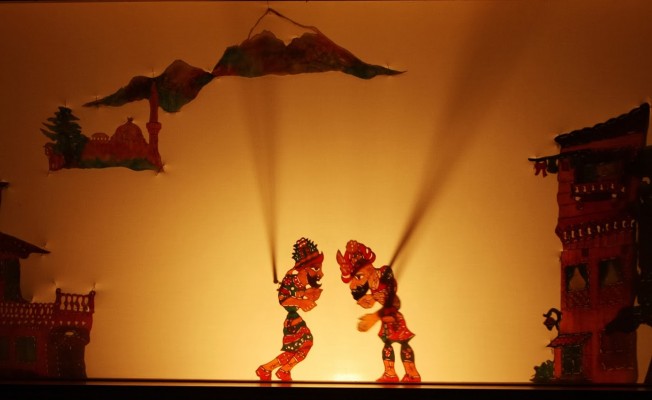